In Favor of Analog Technology

The analog vs. digital conflict is a staple in science fiction, but often it’s clumsily done.  The story between those two usually boils down to what we’ve seen in Pacific Rim: The supermodern digital technology is more vulnerable to attacks and stops working, at which point the obsolete analog underdog comes to the rescue.  In the following article I’ll argue that analog can actually be preferable to digital, and can thrive in future worlds as the more appreciated technology.  And I’ll use the decidedly digital mp3 player as an example of why analog may be superior.

This is a story of two mp3 players from Sandisk: The Sansa Clip, and the later model Sansa Clip Jam.  I’m exceedingly familiar with both, as I’ve been using one or the other while running for nearly ten years.  I picked them because they are incredibly durable, and with a built-in FM radio they are far more versatile than competing products from Apple.  Actually, I picked the Clip Jam only after the Clip died on me, after 8 years of faithful service that I estimated at 4000 sweaty hours of audio books, podcasts and radio. 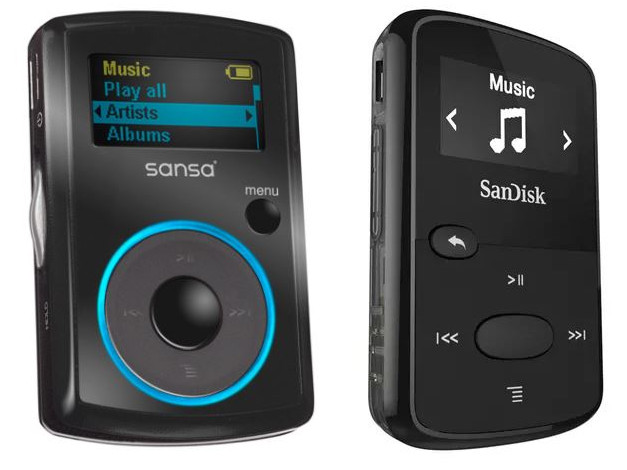 The Clip Jam is a new generation, digital, and yet inferior to the Clip in two important respects.  I believe that these two elements can be easily integrated into a believable science fiction story.

The analog system is much easier to use.  To turn the device on, the slider on the Clip needs to be held in one position for a few seconds.  For the Clip Jam, the middle button needs to be pushed for a few seconds.  In the latter case, the user needs to confirm that the units is booting up by looking at the screen; in the former the powering up can be done by touch, inside of a pocket.

However, the analog interface truly shines when it comes to locking the unit.  When the mp3 player is locked, buttons don’t get accidentally pushed.  For Clip, the user slides the slider into the opposite position as when turning it on, and that’s that.  For the Clip Jam, the user has to hold the Back button until the screen informs him the unit is locked.  The same process, in reverse, must be performed for unlocking the player.

Imagine a common scenario.  You’re listening to some music and suddenly run into an acquaintance of yours.  You want to stop the music or audio book before talking to him.  With the analog system, you slide the slider into the Off position.  This unlocks the player and shuts it down.  With Clip Jam, you have to hold the Back button while looking at the screen, and then hold the middle button and stare at the screen as well.  Not a good way to start a conversation.  In a futuristic setting, I would argue that analog interface would be more efficient.  Levers and physical buttons can allow the user to build the muscle memory needed to push the right button quickly, and to verify the position of the levers without ever looking down.  Thus, the bridge of the original Enterprise is far more useful than the bridge of the ship in Star Trek: Discovery, where crew members are forced to split their attention between their displays, captain’s commands and whatever’s happening on the big screen.

The second reason why analog is superior to digital technology is that it gives the user more control over his devices.  Back to the Sandisk examples.  The Clip Jam introduces a new feature: if the user raises volume above a certain threshold, a confirmation box appears warning the user about damage to his hearing, and requests that the user acknowledges it before allowing him to raise the volume further.  Whenever the Clip Jam starts, the volume is on the same low level.  The Clip does not have it, so I kept the volume on max, and regulated it via an analog wheel on my headphones.  That way, I was much more flexible when the ambient noise changed or news came up on the radio, and I could change the volume even when buttons were locked.  The Clip Jam, by comparison, is a true pain in the ass.

I believe that in a futuristic setting, users will gravitate towards more control over their devices.  This may create an interesting conflict where their superiors advocate for digital technology, which they can control, while users prefer analog.  We can already see this in many dystopian fiction books, with things like money (cashless vs. cash) or weapons that can be remotely locked.  I wouldn’t be surprised to see this conflict also in more comedic settings, such as the crew of the Orville having to click “OK” on confirmation pop-ups while desperately trying to execute a turn that would take the ship out of the path of an incoming missile.

These are but two low-key aspects where analog is clearly superior to digital technology.  Normally, science fiction is looking at the far-out scenarios, like an EMP pulse, and ignoring the day-to-day use of basic devices.  That’s why I used the example of a tiny little device, which I’m using almost every day.  Future people will continue using small devices on a daily basis, and for the sake of their sanity they’ll try to avoid the extra frustration that digital often offers.

This entry was posted in Technology and tagged analog, digital. Bookmark the permalink.

This site uses Akismet to reduce spam. Learn how your comment data is processed.