Anarchy Online has recently celebrated its 17th birthday, and I’ve been inundated with e-mails and messages about returning to the game.  I didn’t.  But it made me reminisce about my life and deaths on Rubi-Ka, the world of the best MMORPG I’ve ever played.

In the realm of science fiction themed multiplayer games, I can name only a few.  The massively popular EVE Online is the first that springs into my mind.  It includes space combat, flight simulation, one of the most robust economic systems in its type of games, and world-shattering player-driven events.  However, it also includes a very high learning curve, and player-vs-player (PvP) combat, where nobody is safe.  On the other end of the spectrum is Anarchy Online.  A derivative of fantasy games, it was successfully rebalanced for a science fiction environment, and had a deep back story that plays significant role in the gaming world.  Most importantly for me, however, was the fact that the bulk of the game focuses on player-vs-monster combat and cooperation among players.  PvP is limited to a few very specific zones.

The game takes place on the planet Rubi-Ka.  The planet is leased by the Omni-Tek Corporation, which mines a valuable mineral, Notum.  Over the centuries of occupation, Omni-Tek developed a few humanoid species that performed certain tasks, in which they were more successful than humans (in this game called Solitus).  Atrox, genderless, is a brute used for mining operations.  Opifex is small and fast, for messenger service and commando-style raids.  Nanomages can manipulate nanobots, which in this game serve in place of magic.  To complement these races, the game offers a fully developed local fauna, very few (and very tough) intelligent local life forms (the original civilization has disappeared, but left powerful technological artifacts behind), and newly invading aliens.

The lore says that after centuries of productivity on Rubi-Ka, a large group of workers rebelled against Omni-Tek, took over a few cities and created the loose confederation of Clans.  Other settlers, mainly newcomers, having seen the conflict declared themselves neutral.  The game’s version of the UN also stepped in and sent its peacekeepers down to prevent atrocities and protect the neutrals.

I was dropped into this whole mess when our colonist shuttle was shut down by aliens.  Fortunately, I survived, and after a short stint on a small island I was able to transfer to Rubi-Ka proper.  I was asked to choose my allegiance: did I want to be a stand-up Omni-Tek employee, a rebel, or not care either way and make my independent life as a neutral?  When I played the game, starting in 2005, this was an important decision.  The game world was full of characters who took their calling very seriously.  Clan members were truly destructive and chaotic, while Omni-Tek employees formed into orderly military units and even had their organizations named after various corporate departments, some of which formed a player-driven governing council.  The neutrals were really lost souls who didn’t seem to be able to put together a decent team.  I became an Omni-Tek employee, and later was admitted into Omni Mining, one of the corporate organizations. (Shout out to my former friends and colleagues Keanne, Ifris, Areania and Okara.  And

others, whose names I’ve regretfully forgotten.)

My career on Rubi-Ka spanned over half a decade.  I fought through the wilderness, through level-locked dungeons (every veteran of the game gets an adrenaline rush when he hears about places like the Temple of the Three Winds or Biomare, where we all spent weeks, if not months in our lower character levels, to defeat the toughest bosses and loot their bodies).  Later, I entered the mythical land of Shadowlands, where I could join a new set of factions, and where the progress was more linear and much tougher.  At roughly the same time the aliens started attacking, and I had the opportunity to ship off world to kick their butts.  Then, my career abruptly ended, as real live stepped in.  At the end of an annual subscription cycle, Funcom, the makers of Anarchy Online, weren’t satisfied with my credit card anymore, but wanted a copy of my passport as well.  I flat-out refused and never came back to the game.  I can only imagine the amount of work they need to do under the new GDPR regulations… 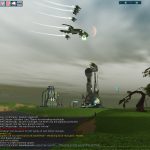 Alien fleet about to attack an organization’s city 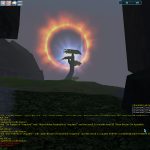 Eclipse in the Shadowlands 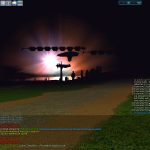 Dawn at Rubi-Ka, with bulk carrier ships getting loaded with Notum. 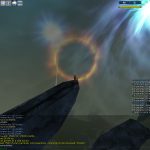 Enjoying the view in the Shadowlands.

One more from the Shadowlands, with native population. 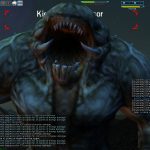 Sometimes, the view is significantly different. Like now, looking into the monster’s stomach. 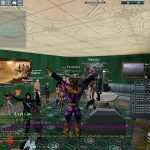 One of many parties I attended. The game included macros for various dance moves, and we went crazy without breaking a sweat. 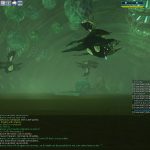 Entering an alien base to kick some alien butt. 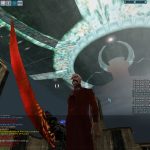 Here I am. With the floating city of Jobe slowly moving overhead. 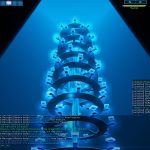 The fast-transit system available to only one class, the Fixers. One of the most picturesque places in the game.

There were several reasons why Anarchy Online was so great, and possibly the best science fiction multiplayer game of its time.

First of all, it was very accessible, yet unique.  Normally, MMORPGs are kept in a fantasy setting.  Funcom, however, managed to create a very unique visual style and rebalance the skills so that they didn’t feel like fantasy anymore.  While there were plenty of melee weapons and close combat classes, some of the most powerful characters used ranged weapons, from pistols and shotguns to machine guns and energy projectors.  “Magic” was replaced by nanobots, and even though it still felt like magic, ranged destruction was kept to a minimum, and instead the players focused on areas where nanobots could conceivably be of use: healing and repair, temporary skill increases, and others.  A few more exotic classes could also build their robots or floating helpers.  Still, despite all these changes, the game adhered to a style close to fantasy role-playing games, and players who were accustomed to fantasy setting had a relatively easy learning curve to join the fun.

Players were another large factor of the game’s popularity.  When I was active, players still role-played.  Not just as game characters, though.  Players actually used the game as a virtual meeting place where they played their own little games of Dungeons and Dragons, or other pen-and-paper games.  You could come across a room with up to a dozen characters, sitting and doing nothing noticeable.  They spent their time in a private chat, roleplaying.  This created a very strong sense of community, which bled over to the actual game.  Funcom game managers added to it further, as they created world-wide events, which directly affected player organizations.  Occasionally, an entire city changed sides, and clan members were up for a rude awakening if they traveled to a city they deemed secure, only to be quickly shot down by Omni-Tek guards.

The third reason why I loved Anarchy Online was the visuals.  Rubi-Ka was pretty, ranging from forests and river lands, to hills and deserts.  But Shadowlands, the newly opened alternate dimension, was spectacular.  I often found myself traveling across the country, just to gawk at the views, sunsets and tiny little characters busy foraging in the distance.  It was like meditation.  Until I got eaten by a boss-level monster that materialized behind me…

Finally, I had a very personal reason to like Anarchy Online.  I lack any sense of competition.  I’m very good at individual sports where I compete against my previous results, such as running, but bad at competitive sports, even in something I was told I was good at, such as tennis.  I simply don’t mind losing, as long as I’m having fun.  However, in a PvP multiplayer game, that makes me a victim.  I’d be losing until I stopped having fun, at which case I’d abandon the game.  For me, this made Anarchy Online unique.  I could very easily avoid competing against other players, and that practice was not frowned upon.  The game mechanics encouraged player cooperation; most regular had similar mindset.  I was among my own folk.

As I understand it, since I was forced out of the game, the player count significantly decreased.  The backend shrunk from three to a single server.  While the graphics amazed me in 2005 to 2012, I was told they weren’t updated, and may look dated in today’s standards.  I’m not sure whether the community spirit is still active there, and whether people are still roleplaying their characters, but I have the impression that much of that has stopped.  I’ve had a good run with Anarchy Online and I’m retaining very fond memories of it.  May it rest in peace.

This entry was posted in Game reviews and tagged anarchy online, mmorpg. Bookmark the permalink.

This site uses Akismet to reduce spam. Learn how your comment data is processed.